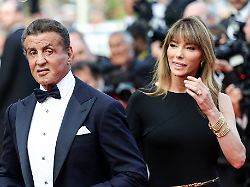 “Will Always Love Her”
Sylvester Stallone talks about reasons for divorce

So now: After Sylvester Stallone’s divorce rumors were denied to the last, his wife is filing for divorce after 25 years of marriage. Now the Hollywood star is open about what led to the end of their relationship.

After a few days of uncertainty, it’s now a foregone conclusion: Sylvester Stallone and Jennifer Flavin have split after 25 years of marriage. According to media reports, the former model filed for divorce from the Hollywood star on August 19 in Palm Beach County, Florida.

Stallone, who denied the speculation until Wednesday and assured it was just a “misunderstanding”, has now spoken to “TMZ” about the marriage. He made it clear that the common dogs were not decisive. The American Celebrity Portal had previously reported, citing an anonymous insider, that Stallone had bought a Rottweiler named Dwight to protect his family, but against his wife’s express wishes. This led to a dispute that revealed even older problems.

However, there is nothing wrong with these rumours, the 76-year-old now said. There have even been discussions about how to care for the new dog as the family commutes between California and Florida. But he added: “We did not end the relationship because of such a trivial dispute.” Rather, they “just took different paths,” Stallone said. “I have the utmost respect for Jennifer. I will always love her. She is an amazing woman. She is the nicest person I have ever met.”

In addition, Sylvester Stallone once again cleared up rumors that the new tattoo on his upper right arm had something to do with the divorce. The “Rambo” actor recently had a portrait of Flavin sewn with the face of his former dog Butkus. The cover-up was only “a solution without malicious intent” because a refresh of the old tattoo was “unsatisfactory”, he now justified himself. But the 54-year-old’s face continues to adorn his back.

Jennifer Flavin has since commented on the divorce. “Although we will no longer be married, I will always honor the more than 30 years of relationship we have,” the former model told People. She also knows that “we are both committed to our beautiful daughters”.

In the divorce documents, Flavin allegedly accused her estranged husband of “mishandling” their joint assets, according to TMZ. Stallone denies the allegations. She also wants to get an order that Stallone stay away from their home in Palm Beach.

precursor to skin cancer Bill Kaulitz scares his fans 09/08/2022 11:02 am Tokyo Hotel frontman Bill Kaulitz just celebrated his 33rd birthday. But on this occasion, not only can he look forward to gifts and congratulations, but also bad news reaches him: a worrying skin change has been discovered in him. Tokyo Hotel singer Bill…

rumors confirmed? Rita Ora hints at marriage 21-09-2022, 09:35 hrs In August it is announced that Rita Ora and Taika Waititi would be married, an official statement is still pending. In a podcast, the singer now makes a hint that seems to confirm the wedding. Singer Rita Ora and director Taika Waititi may have already… After a decade of planning, The Simpsons made its debut on the big screen in 2007. Following three seasons of animated shorts on The Tracey Ullman Show in 1987, Springfield’s most famous family was developed into a half-hour primetime television show. Later, in 1989, the show officially premiered, becoming the longest-running American scripted primetime television…

Farmer Patrick embarrasses his girlfriend, Eric Sindermann is declared crazy and a new couple moves into Germany’s most famous shared flat. It’s a mountain festival in the summer house. And that will be a disaster! Cosimo recently said he regrets that this year’s Sommerhaus season has been way too focused on the squabbles between Eric…