With the announcement of the counter-offensive, the Ukrainian President gave a sign of hope

Ukrainian forces launched a counteroffensive to retake the southern city of Kherson. currently occupied by Russian troops, a local government official said on Monday. The Ukrainian counter-offensive would represent an important strategic advance for the Kiev forces.

“Today there was a powerful artillery attack on enemy positions throughout the territory of the occupied Kherson region”, said the deputy of the Kherson regional council, Sergei Khlanto the TV station Pryamyi from Ukraine. 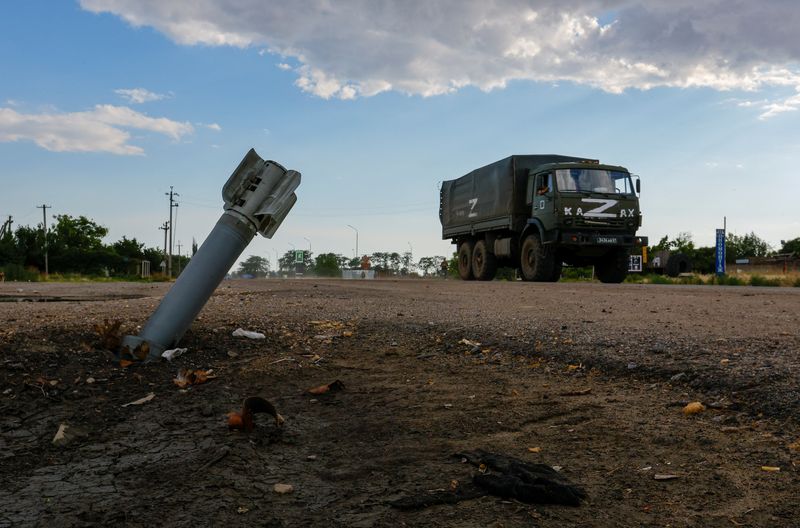 A Russian military truck drives past duds during the Ukraine-Russia conflict in the Russian-controlled city of Chornobaivka July 26, 2022. REUTERS/Alexander Ermochenko

“This is the announcement of what we have been waiting for since spring: it is the beginning of unemployment in the Kherson region”, added the official

Reports about it have been circulating for weeks Ukrainian forces are preparing for a counter-offensive in the south of the countryso in the region Kherson occupied by Russia.

Russian-deployed officials in the region announced on Monday the evacuation of residents from the area Nova Kakhovkain the air raid shelters of their workplaces in a city frequently attacked by Kiev forces. Officials cited Ukrainian missile attacks on the city.

This was previously confirmed by two senior US officials CNN that the Ukrainian armed forces had begun to “design” operations in the south to prepare the battlefield for the counteroffensive.

But in a war plagued by claims difficult to independently verify, Moscow-appointed Crimea regional leader Sergei Aksyonov dismissed Ukrainian claims of a counter-offensive in the region of Kherson as false, as Ukrainian forces in the south and elsewhere have suffered heavy casualties.

Most casualties (eight civilians killed and seven injured) over the past 24 hours were recorded in the eastern Donetsk region. Russian forces carried out attacks in the cities of Sloviansk and Kostyantynivka overnight, and the region’s Ukrainian governor, Pavlo Kyrylenko, urged the remaining residents to evacuate immediately.

The Presidential Office of Ukraine also reported fierce fighting and several Ukrainian attacks in the southern Kherson region. most of which are occupied by the Russians. Ukrainian forces have recently launched attacks on ammunition depots and Russian military positions there.

After the attacks of the past few weeks, a mission from the Atomic Energy Agency will visit the Zaporizhia plant Alyssa Ingham is widely known for being the companion of the well-known Youtuber Stevin Jhon. Here is each element you want to recognize approximately the celebrity’s soon-to-be wife. Contents 1 Alyssa Ingham And Blippi Became Parents, Their First Baby In The World!!2 Alyssa Ingham Partner Details3 Alyssa Ingham Age: How Old Is She?4 Finally, Blippi…