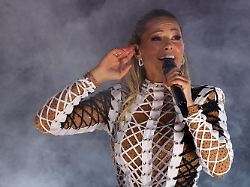 Helene Fischer isn’t quite over her concert in front of 130,000 fans Saturday in Munich. She’s still “digesting, regenerating, and realizing,” she explains. She is already in the mood for a surprise “in the coming days”.

Five days have passed since the “heart tremor” of Helene Fischer and her fans at the Munich Exhibition Center. Now the singer is back for the first time after her mega concert with about 130,000 spectators.

The 38-year-old shares a video on her Instagram page that shows a compilation of the show – both behind and on stage. In addition, Fischer’s song “Zero to 100” will be heard.

“I’m still digesting, regenerating and realizing what I was able to experience through you on Saturday. It was indescribable! Everything you did to experience me, this show, this spectacle touched and humbled me many times that night Fischer writes in her message.

She adds: “130,000 souls gathered to finally celebrate life again – AND HOW! We all needed it so much – emotions, music, freedom!” She was “deeply grateful for this further milestone in my career”. Not only does she thank those who got the show going, but “is always happy to see you again and again, because you put us (on stage) in an absolute rush of happiness – we loved every minute of it with you enjoyed!”

The singer ends her message with a cryptic announcement: “But more in the coming days…” This could be a film to document the performance and will be broadcast on ZDF on October 1.

The Munich show was Helene Fischer’s only concert in Germany this year. Although it rained heavily on Saturday and the event even threatened to be temporarily cancelled, the fans flocked by tens of thousands. So it became the biggest concert in Fischer’s career to date. Only a few visitors who secured an expensive VIP ticket to the show and disagreed with the organizer’s return service came from a few visitors.

emotional apology Lady Gaga has to cancel concert 18/09/2022 15:32 hrs Lady Gaga’s “Chromatica Ball” tour should find its grand finale with a concert in Miami. Then the singer has to stop her performance early. On Instagram, the 36-year-old tearfully reports to her fans and explains her motives. Lady Gaga has canceled Saturday night’s concert…

“Gangsta’s Paradise” rapper coolio is dead 09/29/2022, 4:16 a.m. With “Gangsta’s Paradise” Coolio achieved a worldwide hit in the mid-nineties, which should still ring in the ears of many today. Later he also works as an actor. Now the rapper dies at the age of 59 American rapper Coolio has passed away, he died in… “Essence” featuring Tems, a summer hit song from Wizkid, a global superstar, is nominated at the 2022 iHeartRadio Music Awards for Hip-Hop song of the year. In this year’s iHeartRadio Music Awards, Wizkid will take on Cardi B, Drake, Future, Young Thug, and others in the category ‘Hip-Hop song of the year. PHOTO via @SEPTIN911…