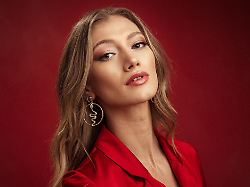 The rumor was already doing the rounds. Now it’s official: singer Leony, together with Dieter Bohlen and Pietro Lombardi, is on the jury of the upcoming anniversary season of “Deutschland sucht den Superstar”. “A great honor,” she explains.

It should be the last time that “Deutschland sucht den Superstar” (DSDS) on RTL (also available on RTL +) goes over the big show stage. For the last season, with which the successful formula will also celebrate its 20th anniversary at the beginning of 2023, Dieter Bohlen will return to the jury as grand seigneur. He gets support from some younger colleagues.

It was previously confirmed that Pietro Lombardi will also celebrate his comeback in the cradle of his success. The 30-year-old won the show’s eighth season in 2011, and was also part of the DSDS jury in 2019 and 2020.

Until now, however, it has been pure speculation as to who could complete the team of judges alongside Bohlen and Lombardi. One name has already been mentioned this week: Leony.

From “Rising Star” to DSDS

And indeed: the singer, who in the past attracted attention with songs such as “Faded Love”, “Remedy” and the modern speaking cover “Brother Louie”, will be at the party, RTL has now officially announced.

“I’m really looking forward to everything to come!” The 25-year-old is quoted. In a sense, her DSDS mission also means a small comeback for her: after all, in 2014 she won “Rising Star” with her then band Unknown Passenger and with that another talent show on RTL.

“Unbelievable, eight years ago I was on an RTL casting stage myself,” Leony recalls and adds: “I never thought I would be able to judge talent in a major music show in 2023. And then next to Dieter Bohlen and Pietro Lombardi – it’s a great honor for me.”

So we already have a wife for Bohlen when leaving the DSDS. But rumor has it that there should also be room for another juror. In conversation for this was Youtuber and singer Shirin David. But she would have canceled. The guesswork about who could take on the female part of the jury besides Leony should go a little further.

Special birthday present Will Michelle Hunziker be a grandmother in January? 09/01/2022, 2:13 PM We’ve known for two days that Aurora Ramazzotti is expecting a child. But now it gets a little more specific. So the date of birth should already be in January. Just in time for her 46th birthday, Aurora’s mother Michelle Hunziker…

“I didn’t want a shit storm” Melanie Müller had a stroke at the age of 34 9/23/2022, 8:12 AM Melanie Müller is constantly in use at Ballermann. A stroke of fate put a brake on her career in the summer. The former jungle queen suffers a stroke. Initially, the 34-year-old hid her health problems. Ballermann…

Foo Fighters commemorate drummers Hawkins’ 16-year-old son leaves fans speechless 09/05/2022, 10:06 AM (updated) In March Taylor Hawkins, drummer of the cult band Foo Fighters, is found dead in a hotel room. Shock and sadness run deep. After months of silence, the band returns to the stage with a huge memorial concert – but the…

They are the figurehead of the United Kingdom: the British royal family. At the same time, she has German roots that go way back. The original family name also comes from Germany. But how German are today’s royals? Almost nothing is considered British like the late Queen Elizabeth II and her royal family. What is…

“Find you immediately visible” Heidi’s top model Lou-Anne loves a football player 09/01/2022, 13:20 hrs In “Germany’s next top model” she leads the way this year. And love apparently goes well with Lou-Anne Gleißenebner-Teskey. This is how she officially introduces her new boyfriend. The two originated via Tinder — even though he’s “a few inches…