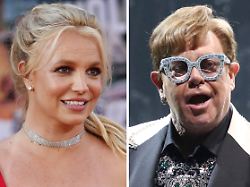 At a surprise performance by Elton John at Cannes on Tuesday, audiences will hear “Hold Me Closer,” his duet with Britney Spears, for the first time. Now the rest of humanity can enjoy the… advantage? Reactions to the song vary widely.

Britney Spears fans had to wait six long years for new music from the American singer. The 40-year-old, who released her last studio album to date with “Glory” in 2016, had announced that she would be turning her back on music while she was still under her father’s tutelage. With the abolition of the conservatory, the singer is now officially back: her song was released this Friday together with Elton John.

“Hold Me Closer” is a club mix remake of his 1971 title “Tiny Dancer”. After Spears gave her Instagram followers a taste of her hit song a few weeks ago – in a much deeper voice than usual “Baby One More Time” There was enthusiastic speculation about how “Tiny Dancer” would sound as a duet more than 50 years after its release.

Elton John had already introduced the song on Tuesday during a surprise performance on the Côte d’Azur in Cannes. The party hit, which according to reports will not have a video clip, was very well received by the public. Most fans on Twitter can hardly believe their luck.

“The weekend is cancelled. Please don’t disturb. I’ll be listening to Britney Spears’ ‘Hold Me Closer’ in the near future. Thank you Britney for this gift,” wrote one Twitter user.

“Okay. I FINALLY got to hear ‘Hold Me Closer’ and I’m so happy for Britney. I hope she’s proud of what she’s done. I hope the song becomes a hit. She deserves a hit. It’s my new bop and I’ll listen to it again,” assures another user.

But the song has also been criticized. “The vocals on ‘Hold Me Closer’ are so muffled it’s hard to tell who’s singing what? A disappointment,” said one fan.

“They made ‘Hold Me Closer’ less cool. The only thing Britney sings alone is the song title and the ending,” said one disappointed user.

“In the past two weeks gay Twitter has done so much with ‘Hold Me Closer’ that I’m a bit overwhelmed now. And sad. I need a drink,” wrote one Twitter user from her gay fan base.

The fact that the party hit is purely an autotune song has also been criticized in some places. “It’s an autotune mess,” sums up one user. Didn’t the singer dare to strain her vocal cords again after such a long break?

Apparently Elton John does not share this criticism. “She sang fantastic,” the 75-year-old told Britain’s “Guardian” about his duet partner. “Everyone said they don’t think she can sing anymore. But I said, ‘She was brilliant when she started, so I think she can. And she did, and I was so excited about what she was doing.” said John.

“She really pushed herself vocally,” said the song’s producer, Mike Watt. “Sometimes when you’re producing, the biggest thing you can do is say nothing, so I just let her do her thing. She knows so well when the right shot is out. She’s accepted full control.”

“A big problem for me”

Shortly before its release, the pop singer shared her enthusiasm for the song. “Okie dokie… my first song in six years,” the singer tweeted on Wednesday. It was “damn cool” that she sang “with one of the most legendary men of this era”. “I’m quite overwhelmed…this is a big deal for me!” She is currently meditating a lot and learning to see each day as a new beginning. “Yes, I choose happiness today. I tell myself every day to let go of the hurt bitterness and forgive myself and others for what may have been hurtful.”

The singer has been under guardianship since 2008 after she collapsed psychologically due to personal and professional problems. Since her father’s 13-year custody order was officially lifted late last year, Spears has repeatedly emphasized that she wanted to celebrate her comeback as a musician.

Eleven Day Tour of Great Britain How the queen’s body is preserved for so long By Axel Witte 15/09/2022, 11:25 am Queen Elizabeth II has been dead for six days. But before she finds her final resting place, she still has a few mandatory appointments to complete. So that they do not become a burden…

The slightly different relationship This is how the Scottish Queen Elizabeth II says goodbye 09/12/2022, 16:16 hrs The Queen often spent her summers in Balmoral. The Scots also adored Elizabeth II, but they had a different view of her than the English. This becomes apparent during the Queen’s last trip to Edinburgh. When John Burleigh…

“That is ridiculous” Brad Pitt wants to age gracefully 9/22/2022, 9:11 PM Brad Pitt has long been the sex symbol par excellence. But at the age of 58, he is already approaching retirement age. There’s no need to despair, he assures, especially since he’s just opening up a new field: the Hollywood star is launching…

“Your Eternal Legacy” Harry honors the queen – and the father too? 13/09/2022, 12:22 PM (updated) Relations with his grandmother were never very tense. Therefore, it should now be easy for Harry to express his appreciation for the Queen. But look at this: he also strikes conciliatory notes towards his father, King Charles III. The…

Farewell to the Queen London expects several million mourners 09/12/2022, 11:05 am For four days, people in London will have the chance to say goodbye to the Queen’s coffin in person. The British metropolis is preparing for a massive stampede. In fact, it could get as rambunctious as it was at the 2005 funeral of…