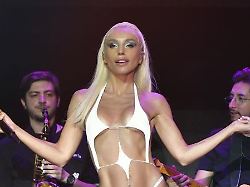 Due to her skimpy outfits, Turkish singer Gülsen repeatedly aroused the ire of the media guards. Authorities are now arresting the musician for a stage prank. Justice accuses the 46-year-old of “inciting hatred”.

A famous Turkish pop singer has been remanded in custody after making jokes about Islamic schools. Singer Gülsen Bayraktar Colakoglu, 46, who is known in Turkey by the stage name Gülsen, was arrested at her home in Istanbul and brought before the magistrate on Thursday. The judge ordered her to be kept in custody pending the conclusion of the “hate speech” investigation.

On stage, Gülsen joked about the religious Imam Hatip schools, jokingly telling a colleague that his “perversion” was due to his schooling at an Imam Hatip school. A video of the performance spread in online networks, sparking outrage among President Recep Tayyip Erdogan’s Islamist conservative party. AKP spokesman Ömer Celik spoke of a “hate crime and a disgrace to humanity”.

Before her arrest, Gülsen was the online networking reported to speak. She joked with colleagues with whom she has worked for years, according to the singer. “I am sorry that my words have given meaning to malicious people who want to divide our country,” she added. She didn’t mean to offend or belittle anyone.

Gülsens lawyer Emek Emre announced that he would appeal against the singer’s arrest and called for her immediate release. “Our client committed no crime,” he told reporters.

Gülsen has released ten albums in her career so far. Since she changed her image in 2004, she has performed at concerts and in music videos, usually dressed lightly. As a result, she has repeatedly had problems with the Turkish media regulator in the past.

Funeral in the Chapel of Saint George This is the procedure for the Queen’s funeral 19/09/2022, 8:15 am A week and a half after the death of Elizabeth II, the state funeral for the late Queen takes place. Hundreds of heads of state, royalty and other dignitaries from around the world will attend the funeral…

Other musicians mourn too Elton John sings to the Queen 9/9/2022, 2:06 pm Sir Elton John knew the Queen personally. In 1998 she even knighted him. In Toronto, the British singer reacts emotionally to her death during an evening concert. And some of his fellow musicians have been deeply affected as well. Sir Elton John…

With Meghan and the kids? Harry will stay in London until the funeral 9/9/2022, 5:08 PM There has been a strained relationship between Prince Harry and his family since his retirement as Senior Royal. He would hardly have contact with his brother and his father, the new king. Still, the 37-year-old is likely to remain…

All eyes on the great-grandchildren George and Charlotte also mourn the Queen 20-09-2022, 11:17 am Her four-year-old brother Louis was allowed to stay at home. But George and Charlotte attend the Queen’s funeral and inevitably find themselves in the spotlight. The children of Prince William and his wife Kate are doing well. As the youngest…