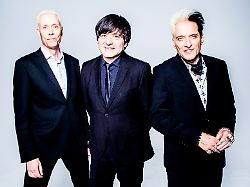 Friday, Saturday, Sunday – Three times in a row Die Ärzte would play a sold-out open-air show at Tempelhofer Feld in Berlin. But in any case, the first concert must be canceled in the short term. It is still uncertain whether Saturday’s performance will be successful.

The concert of the band Die Ärzte, scheduled for tonight in Berlin, was canceled a few hours before the start. Unlike the group’s club show about two months ago, which had to be canceled due to illness in the band, this time it’s again to blame.

The concert for Friday was an open air performance at Tempelhofer Feld. Heavy rain has been falling over Berlin since the afternoon. Lightning can also be seen and thunder can be heard. The storm is expected to increase in the course of the evening.

First, the band Donots, who would be the support act for Die Ärzte, informed their fans that the concert was a failure in the true sense of the word. “Dear people, today’s concert has to be canceled due to bad weather and danger to life and limb. Everyone here is inconsolable. Please come home safely,” the band said in a statement.

Moments later, Die-Ärzte drummer Bela B also addressed everyone who had gotten a ticket for Friday’s show in a story on his Instagram page. “Today’s concert has been cancelled,” he says in his smartphone camera under a roof at the former airport site in Tempelhof. He calls on all people who are not there yet not to go out at all. Police and firefighters did not allow anyone on the site.

There is not only an official storm warning, the musician explains to the certainly disappointed fans. It is also to be expected with “gross lightning discharges” over the terrain. “And I think that’s not so good when it comes to a crowd,” said Bela B.

Two more sold-out Die Ärzte shows are scheduled for Saturday and Sunday at the same venue. Although the weather forecast for Saturday in Berlin also looks quite bleak, the concert is still scheduled to be held. Only the ticket holders for the Sunday show can take a deep breath. Friendly weather is expected in Berlin by the end of the week. The full name of Boy George is George Alan O’Dowd. He was born on the 14th of June 1961 in Barnehurst, London. Skilled in the field of music, he has extraordinary skills as a fashion designer and Photographer. George is an English singer and songwriter, DJ, Fashion designer, Photographer, and record producer.  He visited the…

For the coronation Charles III faces major challenges 20-09-2022, 5:14 am The queen is dead, long live the king! And he has a lot of work ahead of him. Modernization of the royal family, positioning in climate and environmental issues, plus gossip in your own family – the organization of the coronation ceremony should be…

After appearing on MTV Awards Ex-sister-in-law calls Johnny Depp ‘disgusting’ 8/31/22 10:37 PM Johnny Depp’s self-mockery at the MTV Video Music Awards has caused confusion, but also irritation. The sister of his ex-wife Amber Heard does not leave a hair behind with the actor and those responsible for MTV on social media. American actor Johnny…

Creator is excited Ottifant by Otto Waalkes is in the online Duden 26-09-2022, 08:09 o’clock The Ottifant is ennobled by the Duden: The creation of the mute bard of East Friesland, Otto Waalkes, is in the digital version of Germany’s most important language reference work. Waalkes is delighted. Ottifanten have always been one of the…

Standing ovation for comeback Brendan Fraser screams for calm 09/05/2022, 6:19 PM Hollywood star Brendan Fraser suffered a career break for several years. Personal problems are also to blame. Now he was able to return brilliantly with the comic “The Whale”. The fact that he was frantically celebrated at the Venice Film Festival brought the…