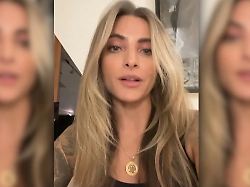 You can’t see the disease, but it’s there and has been with her for a lifetime: as Sophia Thomalla reveals on Instagram, she suffers from a very rare, incurable genetic defect. With her post she wants to help a girl who is also affected.

Presenter Sophia Thomalla has suffered from a venous malformation since birth. The 32-year-old now explains this in various Instagram stories. Translated, that would mean “vascular malformation,” she says of the disease: “It’s a very, very rare genetic defect.” To this day, the doctors couldn’t really explain “where it came from”. She has undergone “countless surgeries” in her life. The next surgery is already pending, Thomalla says. “My right forearm is affected.”

Elsewhere, the 32-year-old says, “The disease is incurable — in more than 90 percent.” And she adds, “It shouldn’t be a whine, I’m fine. I’m not very limited either, other than having to get it checked annually.”

‘Nobody wants to donate her’

The presenter does not make her illness public for nothing. Few doctors specialize in it. Her doctor in Hamburg, who has been treating her for a long time, has now told her about a story that touched her, continues Sophia Thomalla. A girl from Russia named Kira has the same disease as her, only much worse, the whole right leg and part of the buttocks. Kira needs surgery quickly.

However, in Russia there are no options for treating them. That’s why the specialists in Hamburg want to help. The problem of the child, according to the moderator: “No one wants to donate her because she is from Russia.” Thomalla finds that “incredibly sad” because: “What has the poor girl to do with the war?” Thomalla is now asking for donations for Kira on Instagram.

Pianist with three Grammys Jazz great Ramsey Lewis is dead 9/13/2022 4:26 a.m. In the 1960s, Ramsey Lewis managed to get instrumental jazz on the charts. He later scored no more hits, but that didn’t detract from his career. Now the jazz pianist has passed away. American jazz pianist Ramsey Lewis, who became known for…

relationship with Sussex’ Announces with King Charles III. new Zoff on? 09/12/2022, 09:05 (updated) The death of Queen Elizabeth II could be a turning point in the relationship between Harry and Meghan and the British royal family. After all, Charles uses his first speech as king to express his “love for Harry and Meghan.” But…

Concerns about their health are growing Queen Elizabeth II cancels important appointment 2022-09-02, 2:27 PM Queen Elizabeth II has been worrying the British about her mobility problems for several months. After staying away from several events recently, she will not be competing in the Highland Games either. Buckingham Palace recently confirmed that Queen Elizabeth II…

“I decided against it” Why Rowling Skipped the Harry Potter Gala 28/08/2022, 10:06 PM In the dispute over alleged anti-transgender tweets from the Harry Potter author, the protagonists in the film have distanced themselves from her. JK Rowling is absent from a January reunion. In the interview, she now explains her reasons. When the “Harry…

Ex-Beatle was cheeky Queen giggled at Paul McCartney’s joke 09/10/2022 12:33 PM Paul McCartney is considered a chauvinist, but no one would think he would risk a cheeky lip on the Queen of England. But in 2018 he does. However, Queen Elizabeth doesn’t blame it and giggles rather unmajestic. Ex-Beatle Paul McCartney recalled his encounters…

child nine or ten Nick Cannon is going to be a father again 25/08/2022 12:54 pm One thing is clear: American comedian Nick Cannon has many children with many different women. It is not possible to say with certainty how many there are. One thing is certain: there is one more thing to come. If…