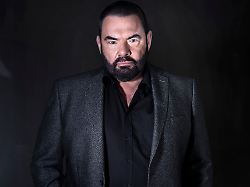 Orchestra instead of synthesizer
Alphaville are “Eternally Yours”

With songs like “Big in Japan” or “Forever Young”, Alphaville provided hits for eternity. Now she is giving band mastermind Marian Gold a new look with the Babelsberg Film Orchestra. The result is the album “Eternally Yours” and a sound experience worth listening to.

Frontman Marian Gold had long wanted to record Alphaville’s music with an orchestra. “I think all bands that work with synthesizers just have a tendency towards classical music,” says the 68-year-old, “even if the people have absolutely no idea about the composition method or the theory – or only to a limited extent, as it used to be.” in our case.”

With their first single “Big In Japan” Alphaville achieved worldwide success in 1984, which was followed by other singles that are now pop classics. Nearly 40 years later, the Münster-based synth-pop band, from whose original lineup only gold remains, rearranged these hits and other songs and recorded them with the German film orchestra Babelsberg for the album “Eternally Yours”.

In the early 1980s, polyphonic instruments such as the then-popular Roland Jupiter-8 synthesizer enabled new sounds resembling those of an orchestra. “It’s a very tempting path, and it’s really hard to defend yourself against,” Gold says. “That’s when pieces like ‘Forever Young’ or ‘Sounds Like A Melody’ arise, for example.” If the latter had a few real strings left, “Forever Young” would be synth pop in its purest form.

With the Babelsberg Film Orchestra, both hits now develop a whole new power, a truly cinematic flair. In the famous finale of “Sounds Like A Melody” there is even “a little bit of Wagner added,” Gold says. “Big In Japan” also sounds spectacular. You would almost forget that the original versions had no orchestra.

As a teenager, Marian Gold was already enthusiastic about the “Concerto For Group And Orchestra”, a collaboration between the hard rock band Deep Purple (“Smoke On The Water”) and the Royal Philharmonic Orchestra. “I kind of fell off my chair because it wasn’t what I expected at all,” he recalls. “It was overwhelming.” It was different with Metallica’s orchestral album “S&M”. “I’m a Metallica fan and I was very disappointed because it wasn’t innovative at all.”

Only having the songs accompanied by the orchestra was out of the question. With the arrangers Max Knoth and Christian Lohr, some songs have changed a lot. According to Gold, a “relatively banal pop song” like “Dance With Me” became a poignant ballad. “What it was originally,” emphasizes the singer. The song is about loneliness and isn’t as happy as the 1986 single sounded like, more sad and melancholic. That now becomes clear.

“You can make a statement from one and the same piece that has always been there,” Gold says, “but that has existed more in secret and is now in full bloom.”

In addition to early hits and songs from their debut album Forever Young, including A Victory Of Love and Summer In Berlin, Alphaville has re-recorded a number of songs that may not have received the attention they deserve. “Dream Machine” from the 1999 Alphaville box set “Dreamscapes” is one such — and the perfect opening track. After a slow start, the piece builds up to its almost dramatic climax.

“Around The Universe” comes from the latest Alphaville studio album “Strange Atractor”, which was released in 2017. It was originally a pop ballad. Now Marian Gold, whose 68 years you neither look nor hear, sings to an orchestral soundscape like something out of a movie soundtrack. It is stylistically reminiscent of Queen’s “Who Wants To Live Forever” from the cult film “Highlander”.

The title track “Eternally Yours” is the only one written specifically for the album. The text consists entirely of fragments of Shakespeare’s sonnets. “Doing such a thing is criminal,” Shakespearean fan Gold jokes. “But I didn’t really care at this point because it was incomprehensible to me how these verses communicated with each other in this context and somehow spoke to me.”

Strings, brass and drums instead of synthesizers and rhythm machines – that works very well at Alphaville. Shortly before the band’s anniversary, Marian Gold and Co. make a truly impressive album with “Eternally Yours”. In the coming year, Alphaville wants to perform the songs live on stage with an orchestra. Under the motto “40th Anniversary: ​​​​The Symphonic Tour” there are concerts in 15 German concert halls. Gold is looking forward to it. “We’re going to do things with our instruments that we don’t normally do.”

Katharina Gerhardt is actually an actress herself – with small roles, for example in “Tatort” or at GZSZ. She is also known as the ex of comedian and “Hausmeister Krause” actor Tom Gerhardt. Not only he should pull eyes when he opens the “Playboy”. For eleven years, Tom Gerhardt imitated the title character in the…

“I can not believe” Meghan allegedly complained about non-payment 25-09-2022, 07:44 hrs Until her royal departure, one of Meghan’s jobs is to connect with the people – shake hands, smile, wave. According to a new book, she would clearly have complained that there is no money for it. Another new publication casts the ex-actress in…

Famous casserole at Fasion Week Hilton is the Barbie for Versace – Kardashian the critically acclaimed 24/09/2022, 5:39 PM Versace causes a stir at Milan Fashion Week with the choice of models. Glamor star Paris Hilton presents herself in a tight sequined dress with delicate spaghetti straps. Both Hadid sisters also wear creations from the…

“Always do these moves” Melanie Müller explains the Hitler salute 28/09/2022, 15:19 hrs A video shows Melanie Müller surrounded by fans shouting “Sieg Heil”, now a second clip appears in which she herself shows the Nazi salute. The police are investigating. In return, the Ballermann singer states that she has nothing to do with right-wing…

It’s not about “Rest” tragedy Million dollar lawsuit filed against Alec Baldwin 09/01/2022, 11:30 am Actor Alec Baldwin threatens with new problems. The family of a killed US Marine has filed a lawsuit against the 64-year-old, demanding $25 million in damages. One of the reasons for this is said to be a photo Baldwin shared…