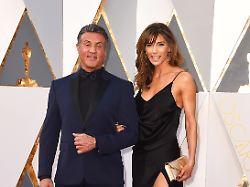 Rumors of a marriage home in Stallone’s household have been circulating for weeks. Now wife Jennifer Flavin confirms the divorce. Sylvester Stallone’s divorce has already been filed, the 54-year-old says.

Jennifer Flavin is divorcing Sylvester Stallone. Rumors of a divorce are circulating. Now she has spoken to People magazine about the end of the marriage. “I am saddened to have filed for divorce from my husband Sylvester Stallone after 25 years of marriage,” said Flavin.

“Although we will no longer be married, I will always honor the more than 30 years of relationship we have,” she said. She also knows that “we are both committed to our beautiful daughters”. She also asked for privacy “as we move forward amicably”.

Earlier, several media reported that the former model filed for divorce on August 19 in Palm Beach County, Florida. Stallone said through his representative: “I love my family. We are addressing these personal issues amicably and privately.”

Sylvester Stallone and Jennifer Flavin married in 1997. They have three daughters together: Sophia, Sistine and Scarlet. In May 2022, the couple celebrated their 25th wedding anniversary with loving Instagram posts.

But the rumor mill about a possible arranged marriage has been simmering for quite some time. An Instagram post from Flavin recently caused observers to sit up and take notice. Capturing a photo with her daughters on Aug. 10, Flavin wrote: “The girls are my priority. Nothing else matters. We celebrate forever.” In addition, Flavin has not been following the actor for a few days.

Stallone recently had a large tattoo done on his right shoulder, a portrait of his wife. Meanwhile, the face of the dog Butkus from the movie “Rocky” can be seen there. A spokeswoman for Stallone explained the move, saying the actor wanted to have his wife’s tattoo redone, but it didn’t look appealing and ended up having to have it completely covered.

Farewell after twelve years GZSZ loses Maren Seefeld 09/06/2022, 09:20 am The comings and goings of the characters are part of a long running TV show like “Gute Zeiten, Schlechte Zeiten”. It’s still hard for fans to say goodbye to long-running characters they’ve grown fond of. Like now from Maren Seefeld, whose actress Eva Mona…

At Sandringham Manor Queen’s cottage for rent on Airbnb 09/07/2022 at 9:24 PM Holidaymakers can live in a very special place at the Queen’s estate in the English county of Norfolk. The gardener’s former home can now be booked on Airbnb along with the park. However, the audience is huge. Sleeping very close to the…

After accusations against frontman Singer Feist cancels tour with Arcade Fire 2022-09-02 8:52 PM Arcade Fire frontman has been accused of sexual misconduct by several women. Vocalist Feist, who was actually supposed to support the band on the current tour, is now taking the consequences. “I can’t go on,” she explains. The musician Leslie Feist,…

“Beast – Hunters Without Mercy” Two children, one father, no survival instincts By Linn Penkert 25/08/2022, 5:38 PM They want to have a good time in Africa to cope with the death of their mother. But soon Nate Samuels (Idris Elba) and his two daughters face a bloodthirsty lion in “Beast”. They couldn’t do more…

“Dying for illusory ends” Udo Lindenberg shows solidarity with Russian pop diva 20-09-2022 01:51 am Russian pop icon Alla Pugacheva has long held back with loud criticism of the war. Over the weekend, she posts an Instagram post in which she no longer hides her attitude. Longtime rocker Udo Lindenberg jumps on the side of…