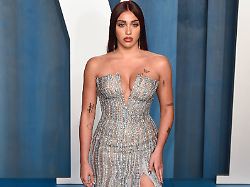 As is well known, the apple doesn’t fall far from the tree. It is therefore not surprising that Madonna’s daughter Lourdes León is now trying to become a singer. “Lock&Key” is the title of their first song, for which a music video was also produced.

Lourdes León, the eldest daughter of pop superstar Madonna, has released her first single. As an interpreter of the song “Lock & Key”, the 25-year-old took the stage name Lolahol.

In the music video for the house number, which was released at the same time, León travels through her native New York, among other things. Many scenes take place in the Machpele Cemetery in the Queens borough. In the last scene of the video, she can be seen with a giant heart-shaped lock on the beach.

Leon had told “Interview” magazine in October that she had “no specific career goal.” She enjoys modeling and dancing, but is actually less interested in acting and singing.

“Honestly, actors annoy me and I can’t be with them. As for music – I can sing. It just doesn’t interest me. Maybe that touches a nerve in me too,” says León.

When it comes to her career, León said her mother always advised her to be careful about what you wanted to be known for. Until now, she had focused on working as a model. She has already posed for the underwear brand of Rihanna and the fashion label Calvin Klein.

Lourdes León is the daughter of Madonna and Cuban dancer and fitness trainer Carlos León. She was born on October 14, 1996. In addition, Madonna has son Rocco, born in August 2000, from her marriage to director Guy Ritchie. Finally, the “Queen of Pop” adopted a total of four children from the African country of Malawi.

“mobility problems” Doctors order queen rest 09/07/2022, 11:10 PM Queen Elizabeth II is advised by her doctors to take a break. Only on Tuesday did the 96-year-old monarch appoint Liz Truss as the new prime minister, and now she is postponing a meeting of her advisory board. On the advice of her doctors, Britain’s Queen…

“Comedy police got strict” “Bully” Herbig Wouldn’t Make Winnetou Parody Like That Anymore 09/05/2022, 11:13 AM (updated) Comedian Michael Herbig thinks it’s right that some things aren’t talked about like they were 20 years ago. Today he questions his parody “The Shoe of Manitou”. However, the justification does not sound very convincing. He is still… One of the most recent kinds of updates it has brought forward is that the music industry in the United States of America is undergoing a complete change. ClickLiZ Music Group Drops Another Music Album ‘Naye Love’!!! It was made possible after the famous music group ClickLiz Group was in the position to launch yet…

First child with André Lemmers Adriana Lima becomes a mother for the third time 09/06/2022, 09:48 hrs Top model Adriana Lima announced her pregnancy in February with a Tiktok video. Now her first son was born together with film producer Andre Lemmers. His name has a very special meaning for the couple. Brazilian top model…

2500 pounds for a corgi The Queen’s Favorite Dogs Win Top Prizes 09/27/2022 10:52 AM Many of the Queen’s official photos also showed her short-legged dogs with pointy ears. Elizabeth II was especially fond of corgis, she even had her own kennel. After the death of the queen, the dog breed is more popular than…