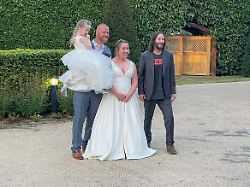 He did it again
Keanu Reeves Surprises Newlyweds

As a wedding celebrity crasher, Keanu Reeves already has experience. In Northamptonshire, UK, the Hollywood star suddenly appears next to a newlywed couple. The bride then raves about the “greatest weekend”.

Actor Keanu Reeves crashed at a wedding in Northamptonshire last weekend. A British couple who had just tied the knot were stunned by the surprise guest.

According to newsweek.com, groom James Roadnight chanced upon the ‘John Wick’ star in the bar of the hotel where the wedding reception was being held. “My husband saw him in the bar and told him he just got married and invited Keanu over to say hello and have a drink with us,” bride Nikki Roadnight told the magazine.

The actor was therefore very friendly and would later have agreed to the invitation. Nikki Roadnight hadn’t counted on the star actually making an appearance. About an hour later, a hotel employee told the newlyweds that a “very special guest” wanted to see them.

The Hollywood star insisted on taking pictures with the couple and the wedding guests. Nikki Roadnight shared some impressions of it on her Twitter account with the caption: “We had the most amazing weekend!!”

For Keanu Reeves, this wasn’t the first wedding crash. In 2018, he posed with a couple getting married at the Dream Inn in Santa Cruz, California. The 57-year-old is known for his friendly nature. Recently, he caused a stir at the New York airport in July when he voluntarily gave an impromptu interview to a young boy.

“You don’t get out that much” Bushido’s wife shows the new residence in Dubai 08/29/2022 09:52 o’clock Bushido emigrated to Dubai with family and friends – and his wife now lets the fans participate in the new everyday family life. On Instagram, the mother of eight not only presents the new house, but also shows…

For a good cause Jason Momoa shaves his skull 09/06/2022, 7:36 PM The long hair is actually his trademark. But they are now history. Actor Jason Momoa has his mane clipped off his head demonstratively. He combines the campaign with a very special message to his fans. Jason Momoa cut off his famous mane and…

Photo was taken in May Palace shows previously unknown portrait of Queen 19/09/2022, 08:00 hrs Shortly before Elizabeth II’s state funeral, Buckingham Palace released a previously secret photo of the Queen. The portrait dates from last May and shows the queen with jewelry she once received from her father. For today’s state funeral for Queen…

“I need time” Justin Bieber has to cancel world tour 09/06/2022 11:53 PM At a performance in Rio, Justin Bieber once again gives his all for his fans, only to realize he can’t go any further. He should “make his health a priority now,” he says. His world tour, which should also bring Bieber to…

Comeback after career break Jürgen Drews is back on the podium 09/06/2022, 09:17 (updated) In July, Jürgen Drews announces the end of his career. But now the “King of Mallorca” surprises the fans with a performance in the “ZDF TV Garden”. The 77-year-old suffers from a nerve disease that limits his mobility. Yet he does…