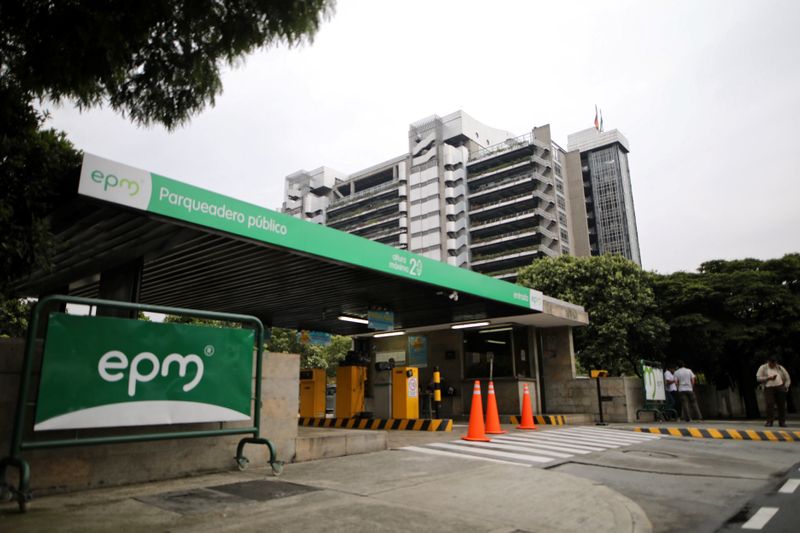 The ex-president Álvaro Uribe demonstrated his support for the sale of the shares Empresas Públicas de Medellín (Epm) has in the telecommunications company Une Millicom. That’s how the political leader put it after the Medellin Council scuttled the project presented by the Medellin Mayor’s Office.

The proposed sale has twice been submitted for Council approval, Both times it was denied The last rejection was the application, so the mayor’s office decided to appeal the decision, but the initiative was also rejected on August 16 this year.

In this regard, the natural leader of the Democratic Center released a ten-point statement to reflect his position on the case. First, Stresses the importance of the sale to meet a ‘tight schedule’ before Epm loses it “to back up” You must buy your shares.

With that, Alvaro Uribe points out that the clause in which the right to leave is agreed applies until August 2024 Epm’s stake in Une. This means that the Antioquian company has until then the opportunity to offer its participation as a preferred issuer, otherwise and if this deadline is exceeded, it will be subject to the offer of the company Une Millicom, whatever the offer you wanted to make.

This is where the divisiveness is concentrated among members of the Medellin group, as even those who voted against approving the sale recognize the relevance of selling the shares before that deadline.

“Our party agrees to conditionally approve this sale because we couldn’t know what the money would be spent on that year,” said Sebastián López, a city councilor opposed to the sale.

Exactly, Two of the six councilors who voted against the sale three times are from the Democratic Center Party. They are Sebastián López and Simón Pérez, who have both opposed the approval so far, but recognize that the issuance of the shares must be completed. With yesterday’s announcement by its chairman, the vote in the next administration before the council could produce a new outcome.

The demand, at least from these two council members, is that Daniel Quintero, Mayor and formal supporter of the sale, explain what the money should be invested in that he will eventually enter the mayor’s office to sell these shares. Various experts estimate that the proceeds from this transaction could be between 2.3 and 2.8 billion pesos.

Mayor Daniel Quintero has referenced various spending goals for this income. He first said that the money would be used to comply with the development plan, then he assured that the money would be used for economic reactivation in view of coping with the pandemic, then he spoke about possible investments due to the damage caused by the winter wave, as well as saying that this would be part of Epm’s investment plan.

In this sense, the former President proposes either Allocate the proceeds from the sale of an EPM investment or leverage the resulting investments in the process for a special fund, accompanied by the Academy, proposes the President of the Democratic Center, Álvaro Uribe. 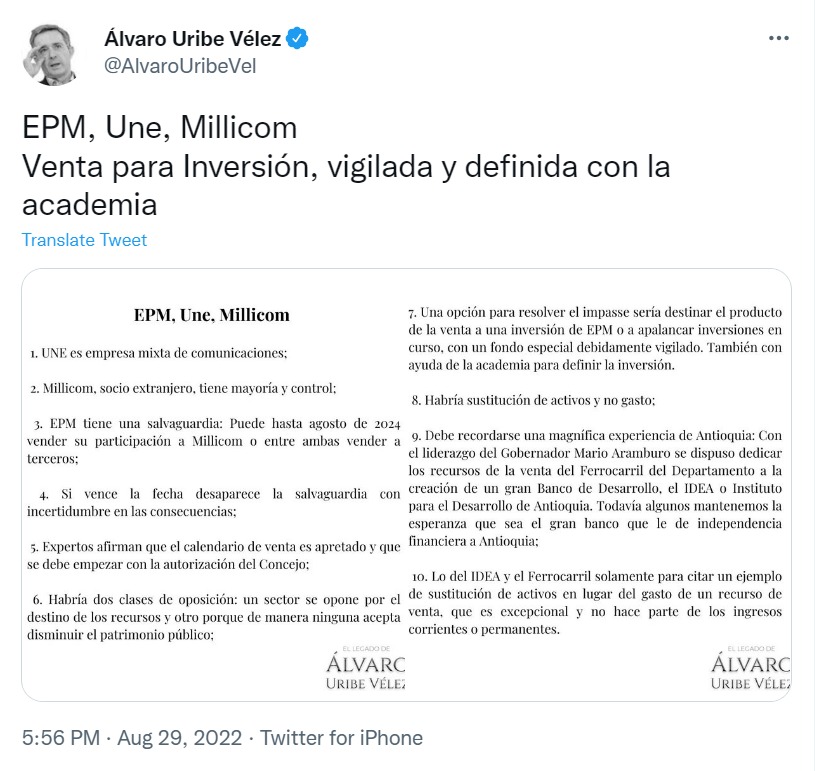 Statement by former President Álvaro Uribe on the sale of Epm shares to Une. Photo by @AlvaroUribeVel

Similarly, in relation to the investment of the proceeds, Álvaro Uribe highlighted the experience from the sale of the Antioquia Railway when, after the proceeds of the resources, the Institute for the Development of Antioquia was created, a financial entity that operates to this day.

Armando Benedetti and Nicolás Maduro met in Venezuela: what they talked about
K-fir and F-16 aircraft from the United States are conducting military exercises in Colombian airspace
Gustavo Petro invited to decarbonize the economies of the CAN countries through the protection of the Amazon and reindustrialization

* Messi and Neymar’s joint cry for a great combined game That Paris St Germain progress steadily in all competitions. With a nice goal Leo Messi, defeated Olympique Lyon 1-0 in which Groupama Stadium and it was like Sole leader of Ligue 1, contested eight days of competition. But he also put up another litmus…

Reference image of lifting an inanimate body. Photo: Colprensa The authorities Investigate the circumstances under which the Director of Forensic Medicine of Norte de Santander, Emel Palacio Montagut, died, who was found dead in a motel room in the municipality of Villa del Rosario during Saturday night. As reported by the regional newspaper La Opinion,…

The government is alluding to the agreement with the International Monetary Fund. So much so that he even “bought” his fiscal focus, he says. Emanuel Alvarez Agis, former deputy economy minister Axel Killo. “Meeting the fiscal goal has become a priority, even if it means sacrificing other goals like reserve accumulation, and this is reflected…

Zaira Nara and Jakob von Plessen were together for eight years A few days after his sister Wanda confirm your separation from Mauro Icardiwas that Monday afternoon Zaira Nara who surprised by the announcement in their stories of Instagram the break with Jacob von Plessenthe father of her two children Malika Y viggo. “After eight…

Japan on Tuesday demanded “official apologies” from Russia after a Japanese diplomat was arrested on alleged espionage charges and accused Moscow of immobilizing and blindfolding him. “The officer was blindfolded, his hands and head were pressed so that he could not move while he was detained, and then he was interrogated in an authoritarian manner,”…

Lens celebrated at home against Stade Rennes in match for date 4 of tournament France – Ligue 1 2022-23. The goals of the game for the locals came from Seko Fofana (20′ 2T) and Lois Openda (24′ 2T). While the away goal was scored by Gaëtan Laborde (46′ 2T). Stade Rennes midfielder Flavien Tait took…