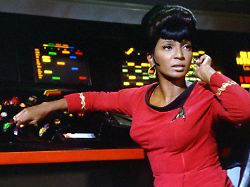 The space, endless expanse – that’s what made actress Nichelle Nichols famous. She would never relinquish her role as Lieutenant Uhura on the Enterprise until her death a few weeks ago. Now the “Star Trek” icon must be properly buried.

Lieutenant Uhura finds her final resting place in space: parts of the ashes of “Star Trek” legend Nichelle Nichols will be flown into space later this year in a rocket. The actress died on July 30 at the age of 89.

According to a press release from Celestis Inc., the company launching the rocket, Nichols will not begin her final journey alone, but with other members of the “Star Trek” family. The remains of “Star Trek” inventor Gene Roddenberry (1921-1991), his wife Majel Barrett-Roddenberry (1932-2008) and actor James Doohan (1920-2005) are said to be on board, who was once chief engineer Scotty. acted in the original series “Starship Enterprise”.

“We are truly honored to add the legendary actress, activist and educator to the Enterprise Flight manifesto,” said Charles M. Chafer, co-founder of Celestis Inc., in a press release. “Now our Enterprise flight will have on board the person who most fully embodied the vision of ‘Star Trek’ as a diverse, inclusive and exploratory universe.”

It is not yet known when the rocket will take off. According to the space burial company’s website, it will launch from Cape Canaveral, Florida. The rocket is expected to fly between 150 and 300 million kilometers into space and beyond the Earth-moon system.

Nichelle Nichols appeared in 69 of the 79 episodes of the science fiction series “Starship Enterprise” between 1966 and 1969. She was considered a pioneer and role model for black women in the film and television world. However, she was never able to build on the success she experienced with “Star Trek”. Suddenly princess Singer LaFee is married 09/01/2022, 6:21 PM When she takes off with German crossover sounds, LaFee is still a teenager. But that was a few years ago now. The singer of songs like “Prinzesschen” and “Hello” is now 31 years old – and has been married since the weekend. When LaFee took the…

“I was scared like never before” Hansi Flick talks about his wife’s breast cancer 16-09-2022, 10:45 am “There are things that are bigger and more important than football.” None other than national coach Hansi Flick came to this conclusion. He recognized that when his wife was diagnosed with breast cancer about twelve years ago, he…