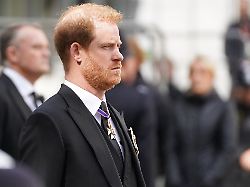 What Happened Behind the Scenes in the British Royal Family Around the Death of Queen Elizabeth II? This continues to fuel speculation. Now there are rumors of a heated discussion. Involved with him: Harry, William and Charles.

The fact is: When Queen Elizabeth II died on September 8, Prince Harry didn’t make it to Balmoral, Scotland, in time to say goodbye to his grandmother in person. It’s also a fact: At first it was said that he and his wife Meghan left for the dying monarch together. Only shortly afterwards was it corrected that he had left on his own accord.

Just like Prince William, who also traveled to Scotland without his wife Kate. In this case, however, unlike Meghan, who wouldn’t have prevented her from accompanying her husband, there was an understandable reason: Kate wanted to stay with her children, who had their first day of school in Windsor on September 8.

William also did not reach the Queen’s deathbed until after her death. However, he was in Balmoral before Harry was, as he had taken an earlier flight to Aberdeen than his brother, along with his uncles Andrew and Edward. He didn’t have to discuss the plane that Harry was supposed to have reached with his father Charles about the possible entrainment of Meghan. At least that’s what “The Sun” is reporting now, citing and writing insider information regarding a violent argument that allegedly took place behind the scenes.

No dinner with Charles and William

Previously, it was rumored that Charles allegedly did not want his son’s wife to be with him on his mother’s deathbed. As “The Sun” now writes, today’s king called Harry “inappropriate” to have Meghan with him at Balmoral.

An unnamed source was quoted by The Sun as saying, “Harry was so busy figuring out how to get Meghan to Balmoral and fighting with his family that he missed the flight.” He blamed his family for the fact that his chances of seeing the Queen alive had fallen so much. In addition, the Queen’s death was announced to the world while it was still on the plane – it didn’t land in Aberdeen until 15 minutes after the official announcement.

Harry was so upset by the situation that he refused to dine with his father and brother, it says. Instead, he dined with Andrew, Edward and his wife Sophie. “It was a violent insult. And he left Balmoral at the earliest opportunity to catch the first scheduled flight back to London,” The Sun quoted her informant as saying.

In fact, Harry left the family circle after only twelve hours in Balmoral. Photos released by the British press show him leaving the castle in Scotland alone in the back seat of a car the morning after the Queen’s death. His head was bowed, his face partially covered by a hand. Shortly after, he also boarded the plane alone, which took him back to London and Meghan. In the humanities and social sciences, we want to offer a place for multidisciplinary methods, different viewpoints, and unique research. Nollywood Being The Vast And Prolific Work addressing social, cultural, political, historical, and economic issues is included. The future of African creative practices, the socio-cultural life of African bus terminals, and family-based health care in… “Unique Artist” Rihanna becomes Super Bowl halftime star 09/25/2022, 10:16 PM First, American singer Taylor Swift was in talks for the halftime show of the upcoming Super Bowl. The NFL is now clearing up the rumors and announcing: Rihanna is taking over the giant show. During the upcoming NFL Super Bowl, Rihanna will be the…