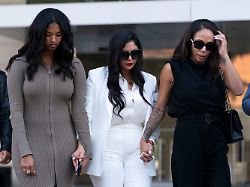 After the fatal helicopter crash of NBA superstar Kobe Bryant, emergency services are said to have “showed” photos of the accident site. On the other hand, widow Vanessa Bryant went to court – and was proved right. Los Angeles County must pay her and co-claimants damages.

A jury awarded Bryant’s widow and another victim $31 million in damages in the lawsuit for photos of the crash site following the death of American basketball star Kobe Bryant in a helicopter crash. The jury on Wednesday, after about four and a half hours of deliberation, ordered Los Angeles County to pay Vanessa Bryant $16 million. The jury awarded plaintiff Chris Chester, whose wife and daughter also died in the January 2020 helicopter crash, $15 million in damages.

The plaintiffs stated in their civil complaint that they experienced emotional distress as police officers and firefighters took photos of the crash site and later shared them with friends and other rescuers. According to Vanessa Bryant’s attorneys, at least 11 police officers and a dozen firefighters shared the photos in the 24 hours following the Jan. 26, 2020 accident.

In recent weeks, an employee of the Los Angeles Sheriff’s Office has “shown off” the photos in a bar, the lawyers said. Another sent photos to a group of video game friends and a firefighter showed photos at an awards ceremony. The Los Angeles County defendant did not deny that the photos were taken. However, his lawyers argued that the images were never made public and have since been removed.

During the Los Angeles trial, however, Vanessa Bryant said she lived in fear that the recordings would find their way onto the internet and then spread further and further. “It’s like Covid,” the widow said in court last week. “Once it has spread, it cannot be reversed.” In a separate lawsuit, the relatives of other victims were awarded a total of $2.5 million in damages for the photos last year.

Kobe Bryant, his 13-year-old daughter Gianna and seven other occupants were killed on January 26, 2020, when their helicopter crashed near Los Angeles. According to the investigation, the pilot of the helicopter apparently lost his way after falling into thick clouds.

Bryant is considered one of the greatest players in the history of the North American professional league NBA. He won five NBA championships with the Los Angeles Lakers in his 20-year career and won gold medals with the U.S. team at the 2008 and 2012 Olympics. In 2016, he ended his career.

Strengthening the EU relationship Will Charles go to Paris first? 9/22/2022, 11:19 a.m. It would be rather unusual: his first trip abroad could be Charles III. should not lead to a Commonwealth country, but to France – as a sign of solidarity with Europe. In the meantime, the new monarch probably wants to make cutbacks…

King of Pop would 64 . to be Paris, Prince & Co remember Michael Jackson 8/30/2022, 8:04 PM Michael Jackson’s memory has cracked in the shadows of the posthumous allegations of abuse against the singer. Last but not least, his children still honor their father, of course. So now on the day he would have… Three Mile Island was the site of a momentous event in 1979, so why is it being recognised now, in 2022? A lengthy time passes before the incident resurfaces in the public eye and becomes a topic of conversation again. Which person and why did this come up again? 3 Mile Island: what exactly happened…

After five years of relationship Leonardo DiCaprio may be available again 08/31/22 10:39 AM Leonardo DiCaprio has an unusually long relationship with model Camila Morrone. Many believe that the 47-year-old has finally found love with her. But now the actor and the 25-year-old model are said to have split up. In love after more than… Mai Mulroney is a famous American actress who rose to fame after the release of Unchained. She has been in the limelight for years now.  Mair loves to spend time with her family and regularly posts pictures of them on her social media profiles. Furthermore, she has contributed vocals and compositions to commercials and the…