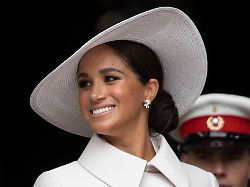 In the first episode of her podcast Archetypes, Duchess Meghan discusses with tennis pro Serena Williams the resentment women face when they are called “ambitious.” This was criticized by some listeners.

After a long wait, Duchess Meghan has released the first episode of her podcast “Archetypes” on Spotify. In it, the 41-year-old challenges societal gender stereotypes that often keep women from realizing their full potential. The mother of two spoke to tennis pro Selena Williams mainly about the dislike of women when they are called ‘ambitious’.

Accordingly, “ambition” wasn’t a “dirty word” for Meghan until she started dating Prince Harry. “Apparently, ambition is a horrible, horrible thing for some – at least for a woman. Ever since I’ve felt the negativity behind it, it’s really hard not to feel it.” She couldn’t overlook it either, as there are “millions of girls and women who regularly shrink, so much smaller”.

Ambitious men, on the other hand, are viewed more positively than women with the same drive. Inequality increases when children are involved. “The double standard of how men and women are treated after they have children is so real, I felt it,” Meghan says. Williams agrees with her boyfriend: “Often women are definitely put into those different boxes when we’re ambitious or when we have goals or when we achieve our goals.”

There is also “the misconception that as an ambitious woman you have an agenda, that you have to be calculating or selfish or aggressive or progress-oriented,” continues Meghan. “And that you somehow deserve what is thrown at you when you are so wild, so strong, so brave.”

The (negative) reactions to the podcast were not long in coming. Above all, an anecdote told by the Duchess of Sussex at the outset has been met with criticism. In 1993, at the age of 12, the American protested against a sexist advertisement for Procter & Gamble kitchen sponges, which was only aimed at women. Shortly afterwards, the company changed the ad text.

“I was ready to switch off when I heard the story again,” writes one Twitter user. Elsewhere, it says it’s “pathetic” that the 41-year-old still has to rely on this childhood story. British royal commentator Angela Levin rates the podcast on “Talk TV” as a “blow to the royal family”. Meghan is “ungrateful”, sees herself as a “victim” and misunderstood the term “ambition”.

Meghan, on the other hand, agrees with Laura Kray, faculty director of Berkeley University’s Institute for Justice, Gender and Leadership, who is on halfway through the podcast. Her research has shown that there is a “persistent double standard” about how ambitious women are perceived in society and especially in the workplace.

“We see that identical behavior in a woman is viewed more negatively than in a man. An ambitious woman is seen as power hungry, manipulative and untrustworthy, while an ambitious man is seen as someone to emulate,” says Kray. “He’s seen as a role model, a captain in his industry. We see people using these different terms for the same behavior, so the only explanation is that it comes down to antipathy towards women.”

In the following episodes, Duchess Meghan wants to go into more detail about the labels that “hold back and undermine women”. She also wants to focus on terms like “diva,” “slut,” or “crazy.” Other guests include prominent women such as singer Mariah Carey, actress Mindy Kaling and comedian Amanda Seales.

Farmer Patrick embarrasses his girlfriend, Eric Sindermann is declared crazy and a new couple moves into Germany’s most famous shared flat. It’s a mountain festival in the summer house. And that will be a disaster! Cosimo recently said he regrets that this year’s Sommerhaus season has been way too focused on the squabbles between Eric…

Aston Martin brings in millions James Bond car auction moved to tears 29/09/2022, 07:55 AM ‘It’s great’: The auction of cars and other James Bond movie props – such as the watch 007 wore or a boat – raises so much money that it is emotionally overwhelming and moves those involved to tears. After all,…

The follow-up couple Vanessa Marioposa and Diogo Sangre draw the dismay of the housemates. Sporty, revealing and also on the winning side: “Dude, how unfair!” So was the 7th episode of “Summer House of the Stars”. “Sorry! I can’t stand that! I’m 180, man! So humorless, I can’t believe it!” Man, “dude”! Someone is blowing…

Involved in the series licensing How Kaley Cuoco Became a Multimillionaire with the Big Bang Theory 09/11/2022, 11:07 PM “The Big Bang Theory” is one of the most successful TV sitcoms of all time. Lead actress Kaley Cuoco not only became a global serial star with her role, but also filthy rich. Both TV and…