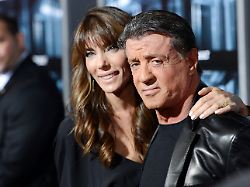 After 25 years together
Has Stallone’s wife filed for divorce?

Since the Rocky actor replaced a tattoo of his wife’s face with a photo of his dog, there are rumors of a wedding at Stallone’s house. The actor recently denied that. Sources now report that Jennifer Flavin has already filed for divorce.

Are the rumors about the marriage of Sylvester Stallone and Jennifer Flavin true? According to Page Six and TMZ, 54-year-old Flavin has officially filed for divorce. Accordingly, the former model filed the papers with Palm Beach County on August 19, after 25 years of marriage. The 76-year-old actor made a statement through a spokeswoman available to TMZ: “I love my family. We are addressing these personal issues amicably and privately.”

As “TMZ” also reports, wealth distribution also seems to be a problem. Accordingly, Flavin should demand that Stallone be denied access to the joint fortune with immediate effect. Only in this way, according to the divorce papers, can the common money be divided fairly. There is no official confirmation yet.

Tattoo already covered with his wife

The rumor mill about a possible marriage has been simmering for a long time. The Hollywood star recently had a large tattoo edited on his right shoulder, a portrait of his wife. Meanwhile, the face of the dog Butkus from the movie “Rocky” can be seen there. A spokeswoman for Stallone explained the move, saying the actor wanted to have his wife’s tattoo redone, but it didn’t look appealing and ended up having to have it completely covered.

An Instagram post from Flavin also recently caused observers to sit up and take notice. She captioned a photo with her daughters on August 10: “The girls are my priority. Nothing else matters. We celebrate forever.” In addition, Flavin has not been following the actor for a few days.

Stallone and Falvin married in 1997. They have three daughters together: Sophia (25), Sixtine (24) and Scarlet (20). Stallone himself had flatly denied rumors of a split with the British newspaper “Daily Mail”. There are no problems in his relationship with Falvin, he assured.

No Christmas show ‘Helene Fischer Show’ will also fall into the water in 2022 09/05/2022, 7:58 PM The Christmas show with Helene Fischer, which is seen by millions of viewers, is also canceled this year. There are too many challenges associated with the planning and execution of the show, it is said. However, there is…

After a TV wedding with Heidi Klum Theresia Fischer announces marriage 09/08/2022, 11:01 am In “Germany’s next top model” she only came in eleventh place in 2019. Still, Theresia Fischer is one of the main subjects of the show. And not just because of her hug, but also because she symbolically marries her 28-year-old boyfriend…

Glad that’s settled The Queen’s dogs have a new home 09/12/2022, 4:49 PM The death of Queen Elizabeth II raises many questions that must now be answered. Including this one: what will become of your two corgis now? But don’t worry, the cow – or rather the dogs – are coming off the ice. Muick…

From Sunday Peter Kloeppel will be in a new studio. There he will continue to moderate RTL Aktuell – but just a little differently. In the interview he talks about his work as a journalist and “the million dollar question in America”. “RTL Aktuell” will soon be broadcast from a new news studio. How many…

Tears in the “Summer House of the Stars” Farmer Patrick shows his true face 20-09-2022, 10:00 a.m. Airtime provocations, initiating a “revolution” and a farmer who disrespects his farmer’s wife: In this episode of the ntv podcast “Ditt & Datt & Dittrich”, Verena and Ronny talk about nightmare relationships and shout out loud: “Run “Antonia,…