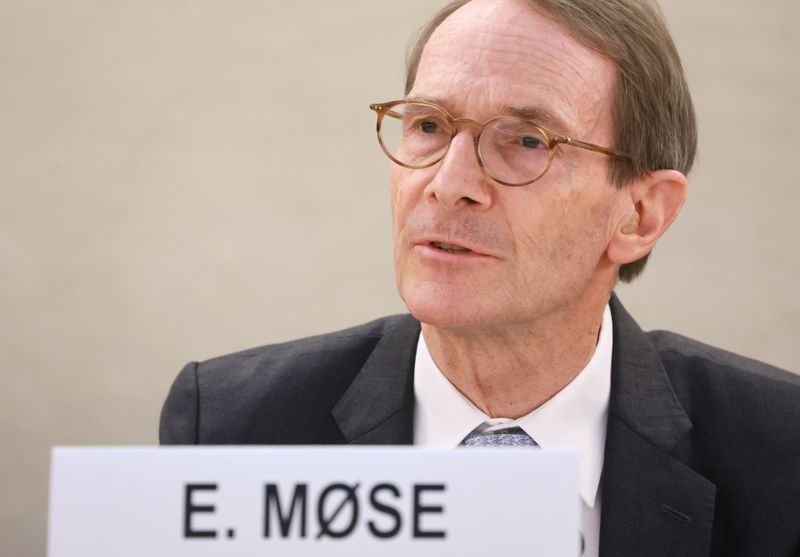 GENEVA, Sept 23 (Reuters) – The head of an independent commission of inquiry into Ukraine said on Friday it had concluded that war crimes had been committed in Ukraine after investigations in four regions of the country.

“On the basis of the evidence collected by the commission, the commission has come to the conclusion that war crimes were committed in Ukraine,” Erik Møse told the Geneva-based Human Rights Council.

It was not specifically said who committed the crimes, but the commission’s work focused on areas of Ukraine previously occupied by the Russian army, such as Kyiv, Chernihiv, Kharkov and Sumy.

Russia was asked to respond to the allegations at the council meeting, but its seat went vacant. Russia has repeatedly denied deliberately targeting civilians during its “special military operation” – as the Kremlin calls it – in Ukraine and has in the past said allegations of human rights abuses are a smear campaign.

Investigators from the commission set up by the UN Human Rights Council in March visited 27 sites and interviewed more than 150 victims and witnesses.

The commission found a large number of executions in the areas it visited, including bodies with their hands tied, throats slashed and gunshot wounds to the head, Møse said.

He added that investigators had identified victims of sexual violence between the ages of four and 82. Some children have been illegally raped, tortured and imprisoned, he said.

Occasionally, investigations initiated by the Council can be used before national and international courts, as in the case of a former Syrian intelligence officer who was arrested in Germany in January on state-sponsored torture charges.

Social reform: new citizen income confirmed The federal government has launched what is probably its biggest social reform, the so-called citizens’ money (Bürgergeld). In the future, the state must respond more to the unemployed and the needy on an equal footing.

At least 35 people have died in demonstrations that began more than a week ago in Iran after the death of a young woman who was arrested by police for wearing the veil in an “inappropriate” way, according to an official tally this Saturday. For eight straight nights since the death of 22-year-old Mahsa Amini,…

Berlin, 2.9. The German government today reiterated that the issue of World War II reparations to Poland is legally closed, but recognizes that responsibility for the damage caused by the Nazi invasion is a matter that can never be closed. “The government’s position on reparations claims has not changed. From the government’s point of view,…

AMLO reported that the soldiers who took part in the confrontation that left the minor Heidi Marina under the age of four will be punished (Photo: Cuartoscuro//Twitter) President Andres Manuel López Obrador (AMLO) indicated that in the case of Heidi Marinaa four-year-old minor who died after receiving a stray bullet during an alleged confrontation in…

Beijing, 31 August (EFE) .- China’s National Health Commission announced today the discovery of 392 new positives for the SARS-CoV-2 coronavirus this Tuesday, 349 of them due to local contagion in places like Sichuan (centre, 164) . , Tibet (West, 45) or Hainan (South, 36). Health authorities today also reported the discovery of 1,426 asymptomatic…